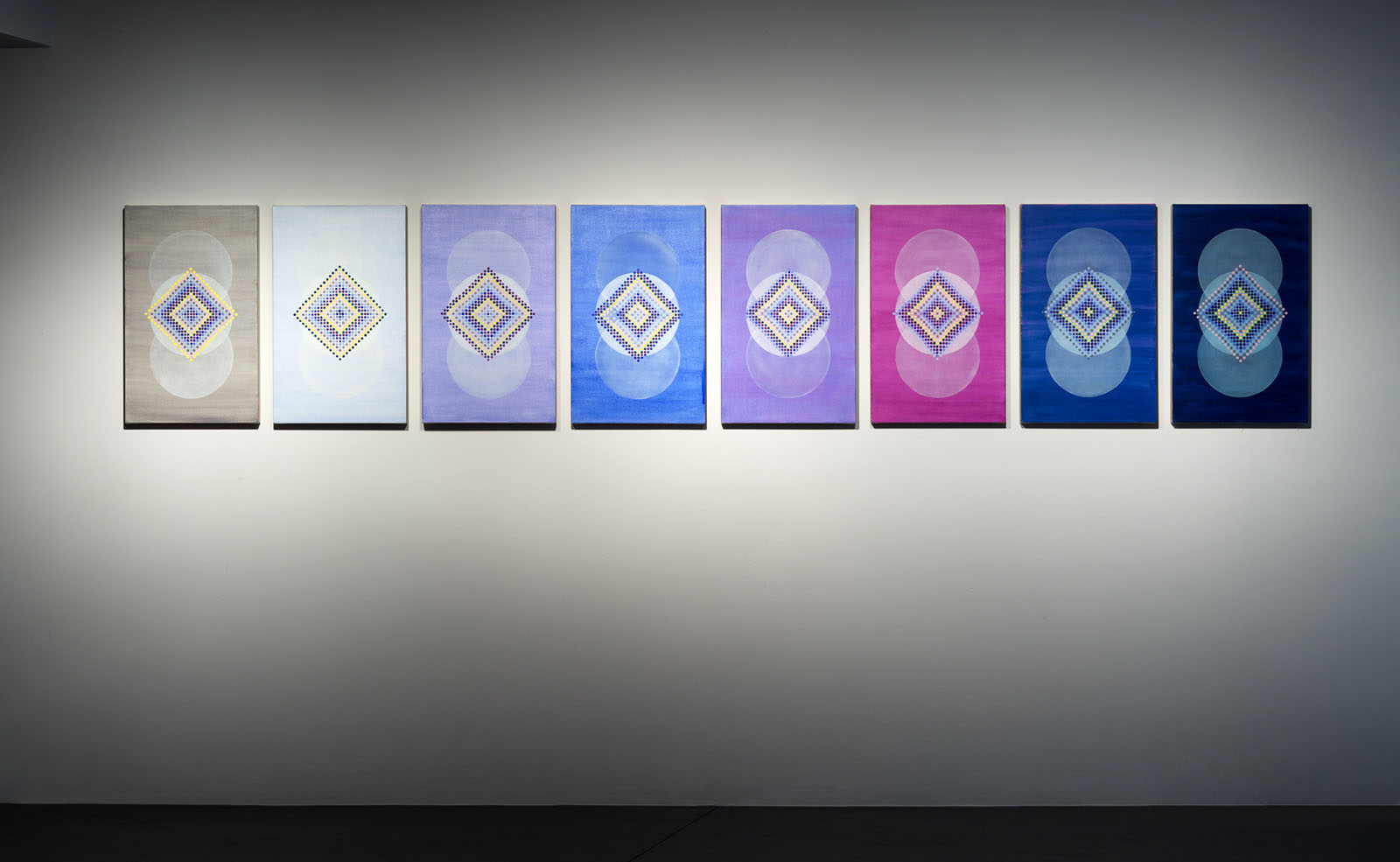 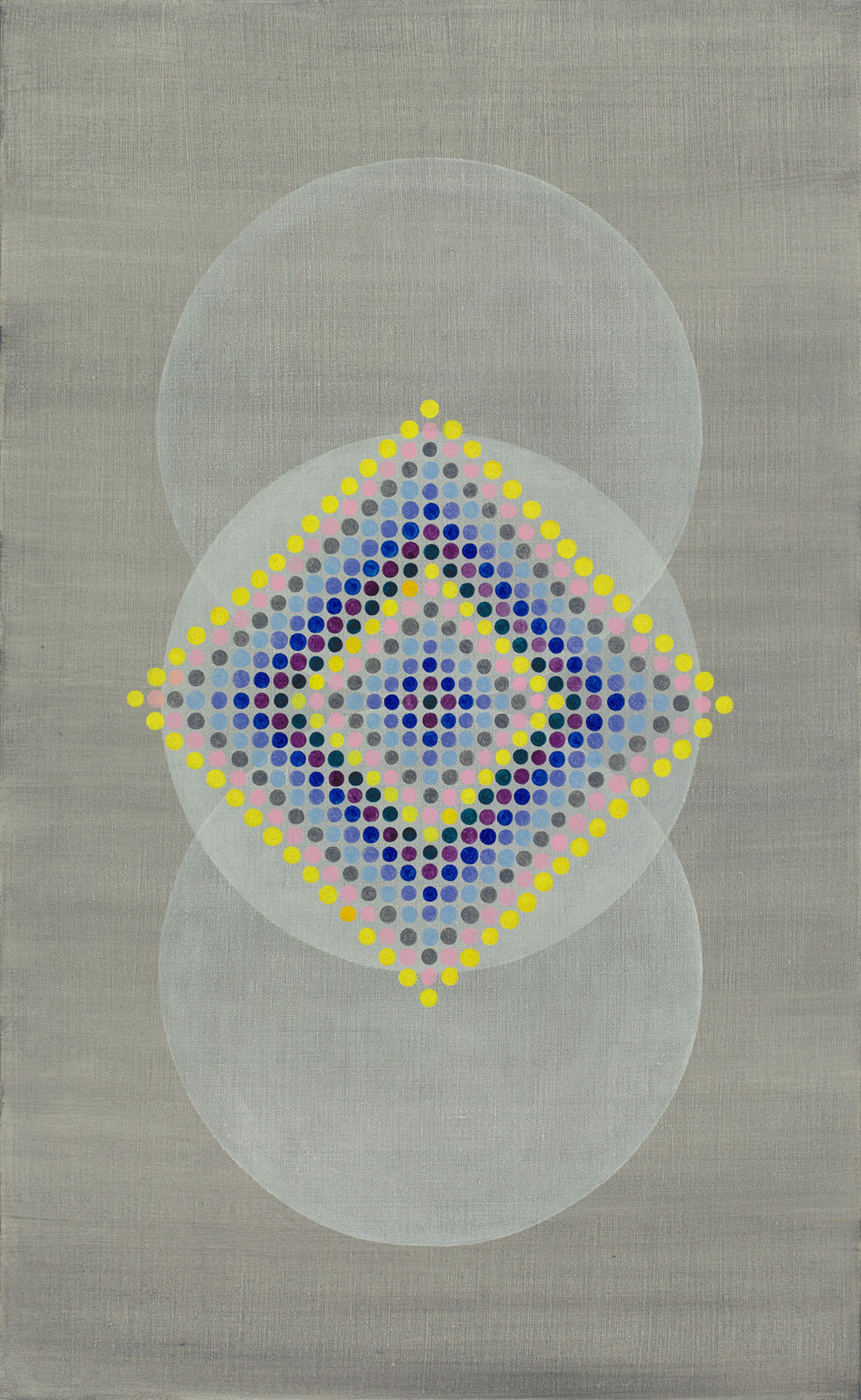 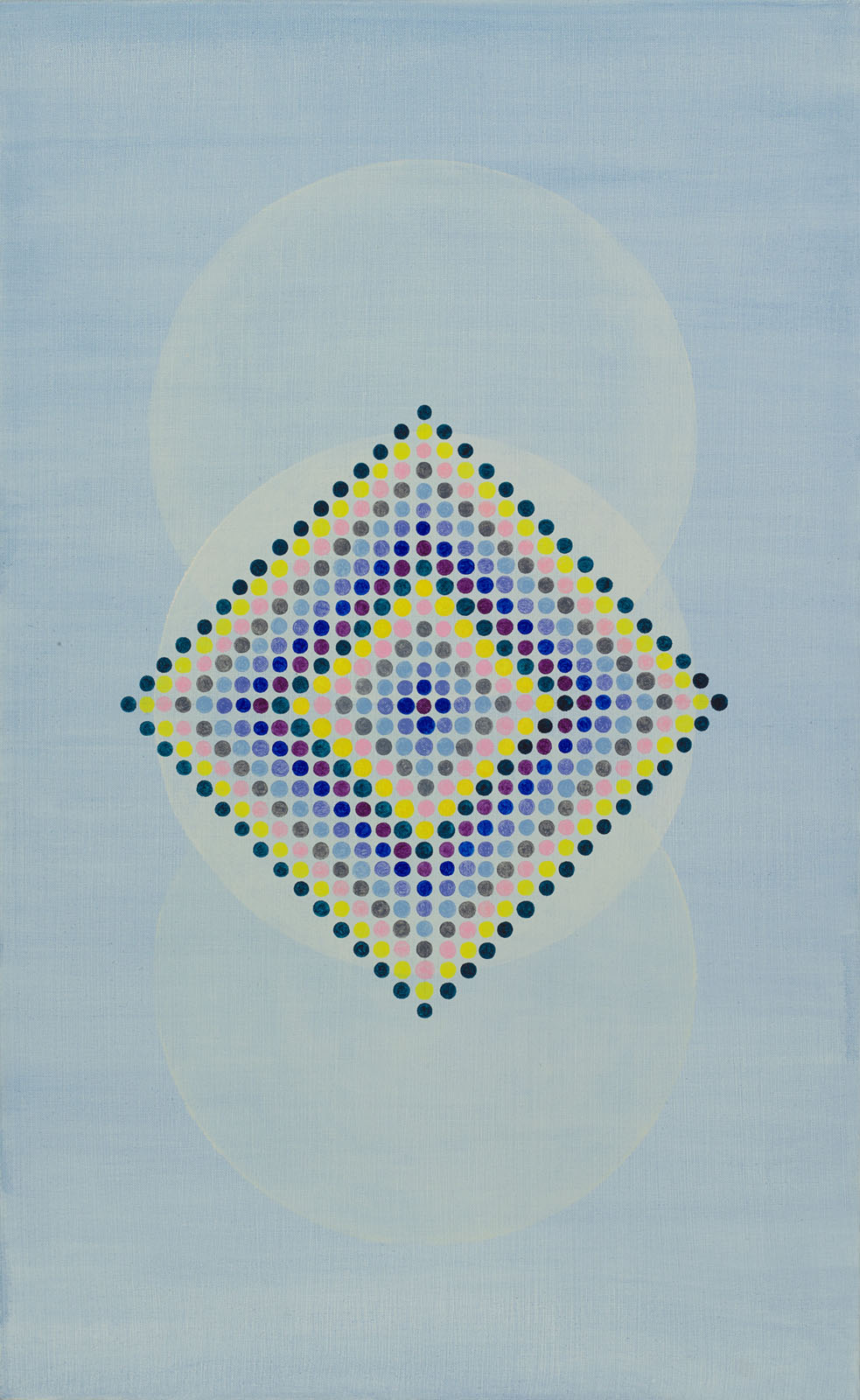 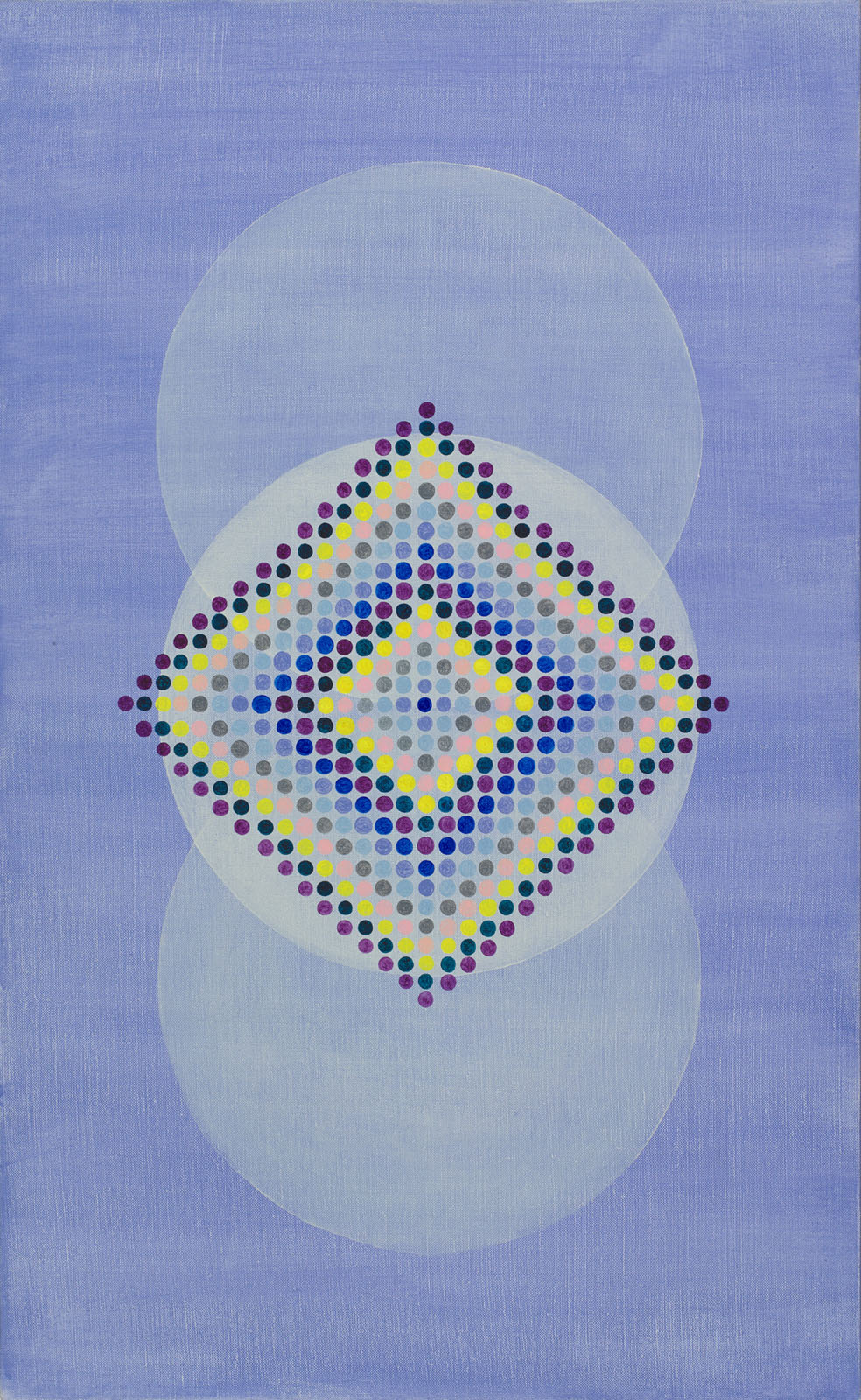 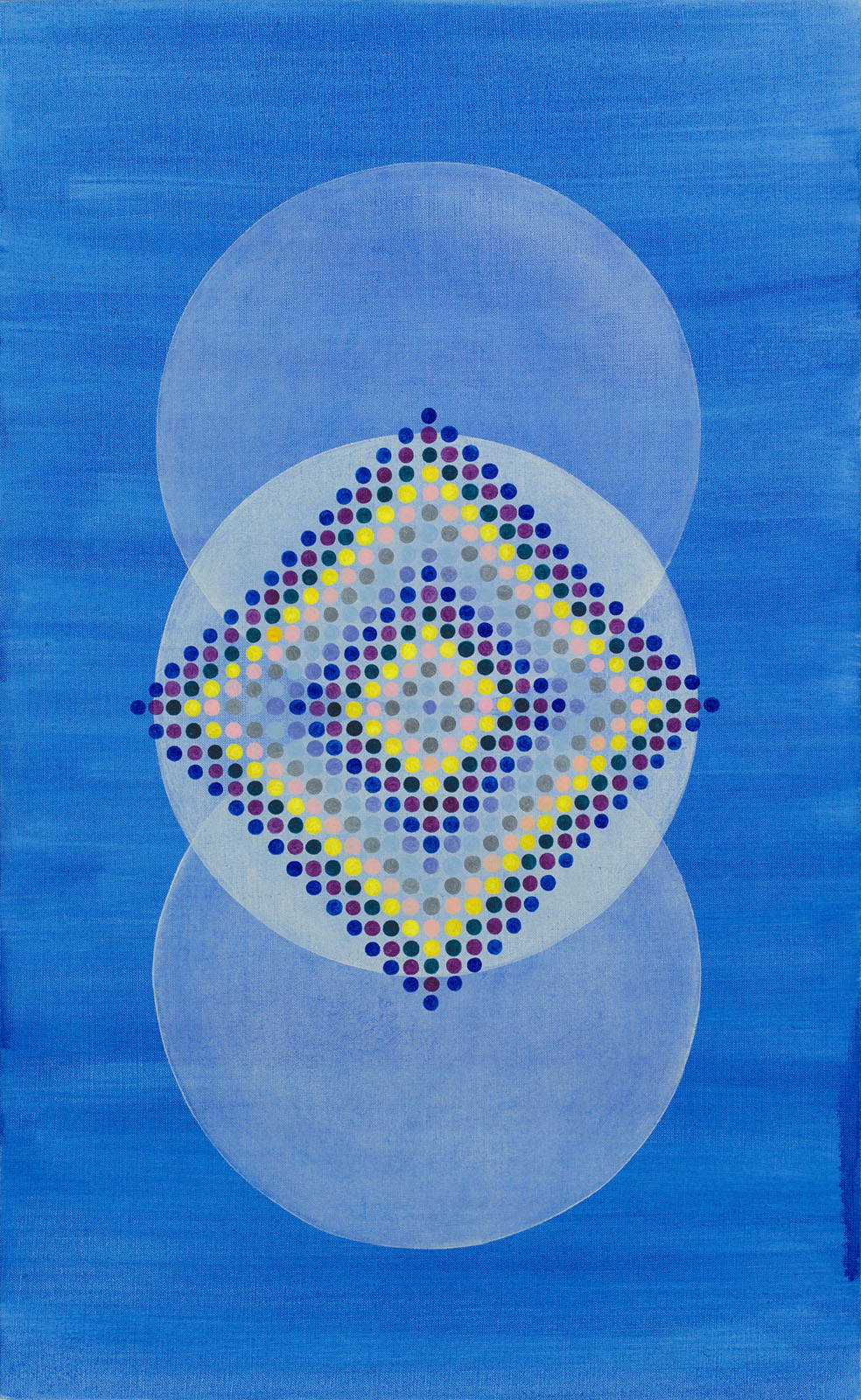 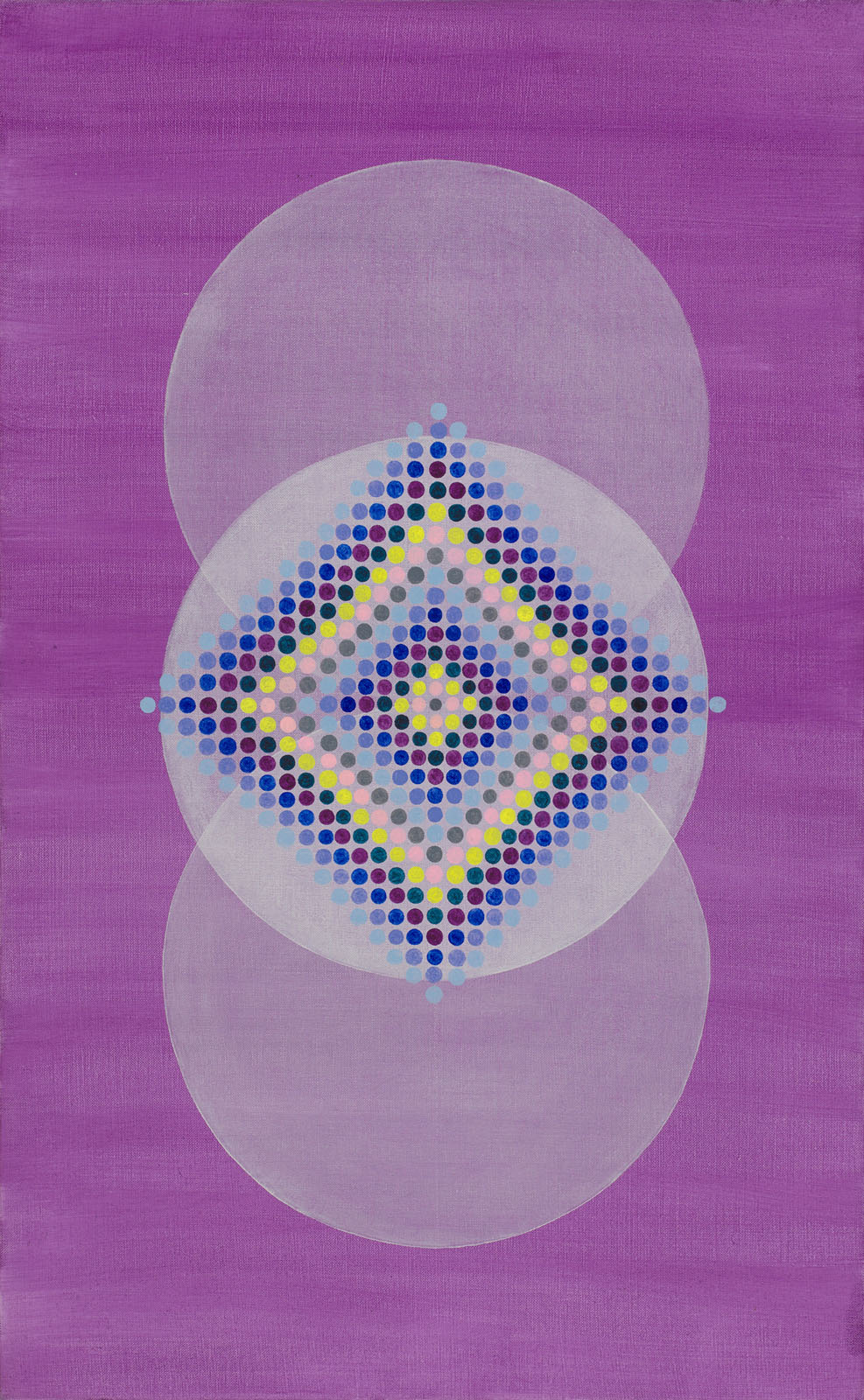 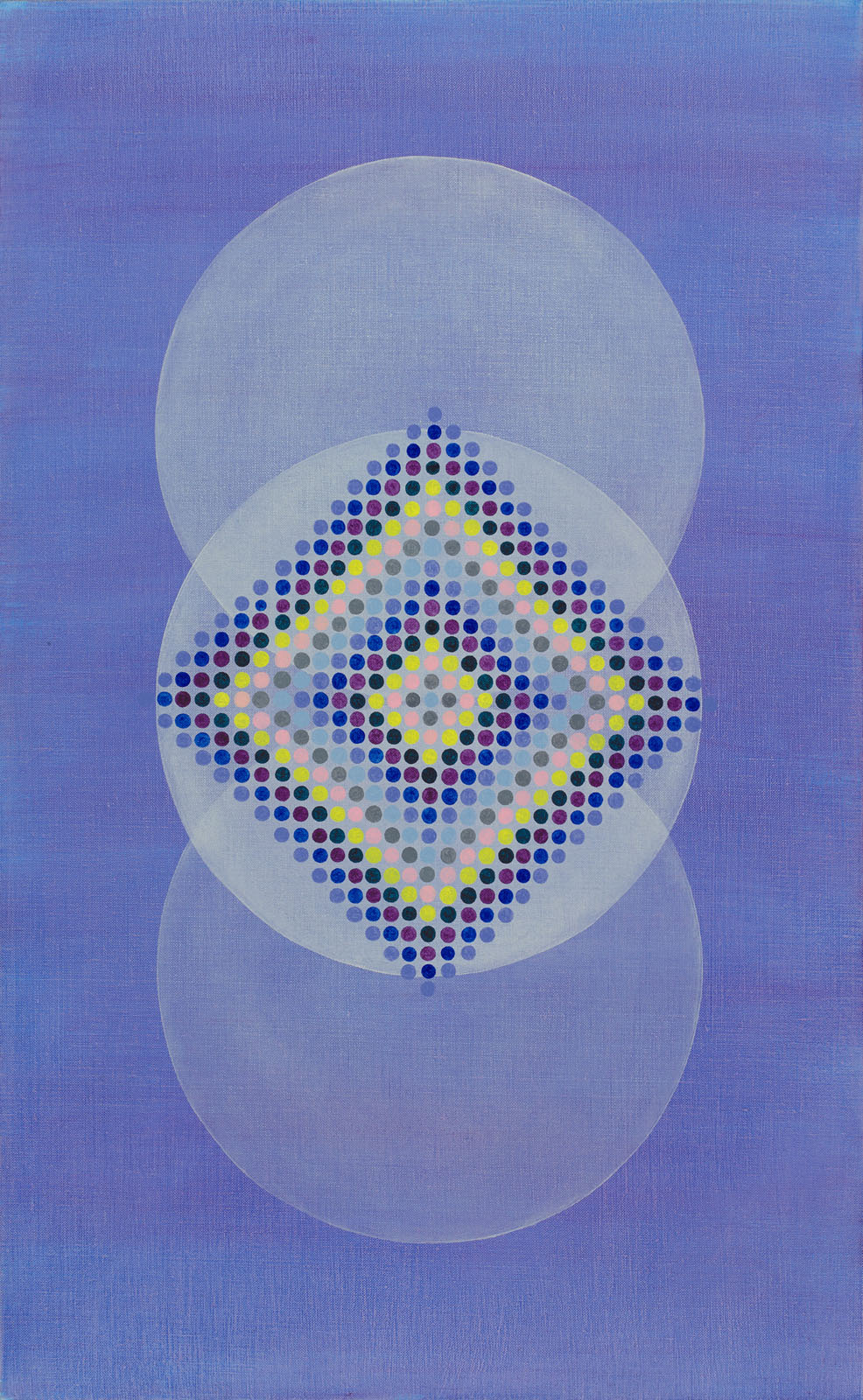 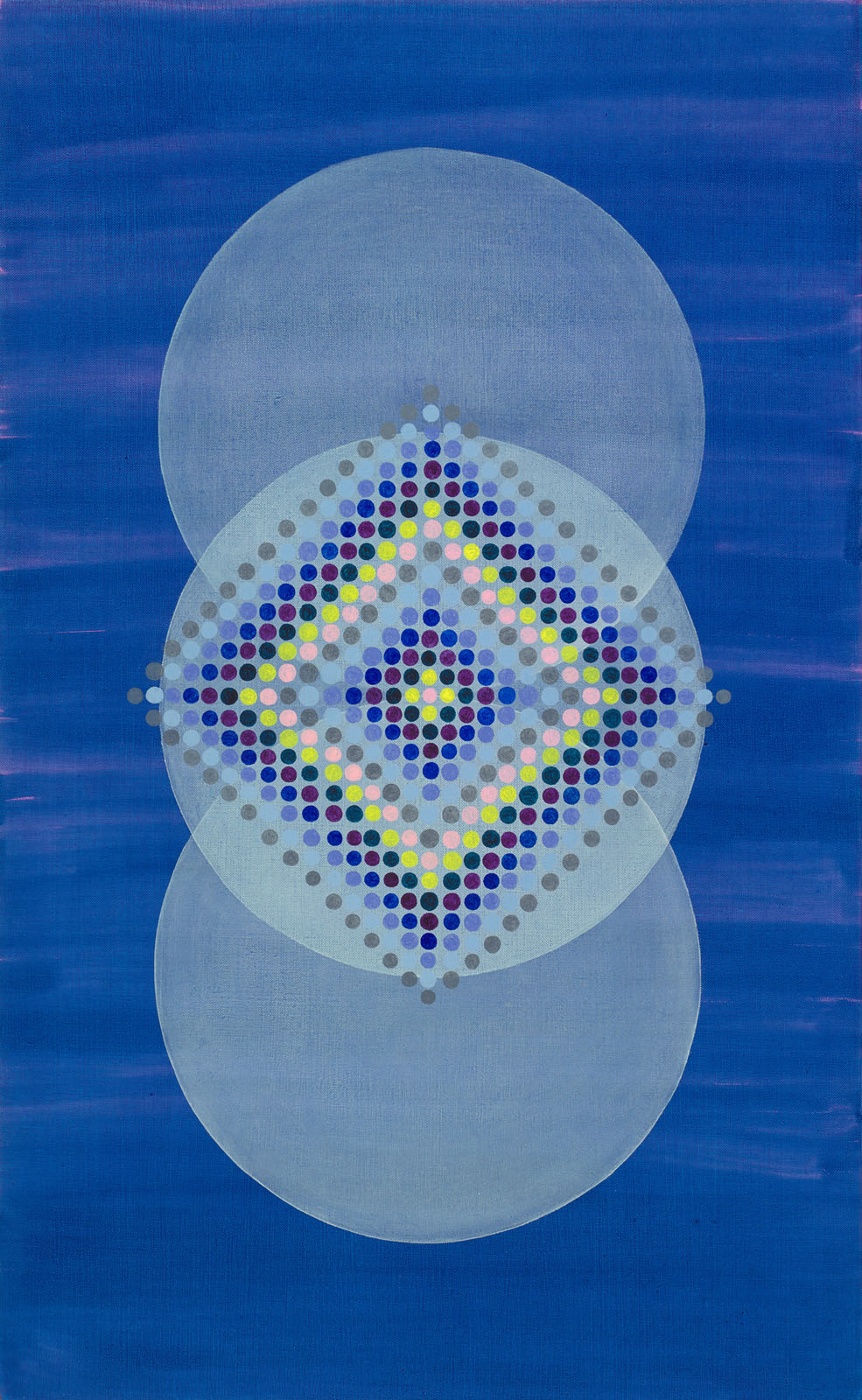 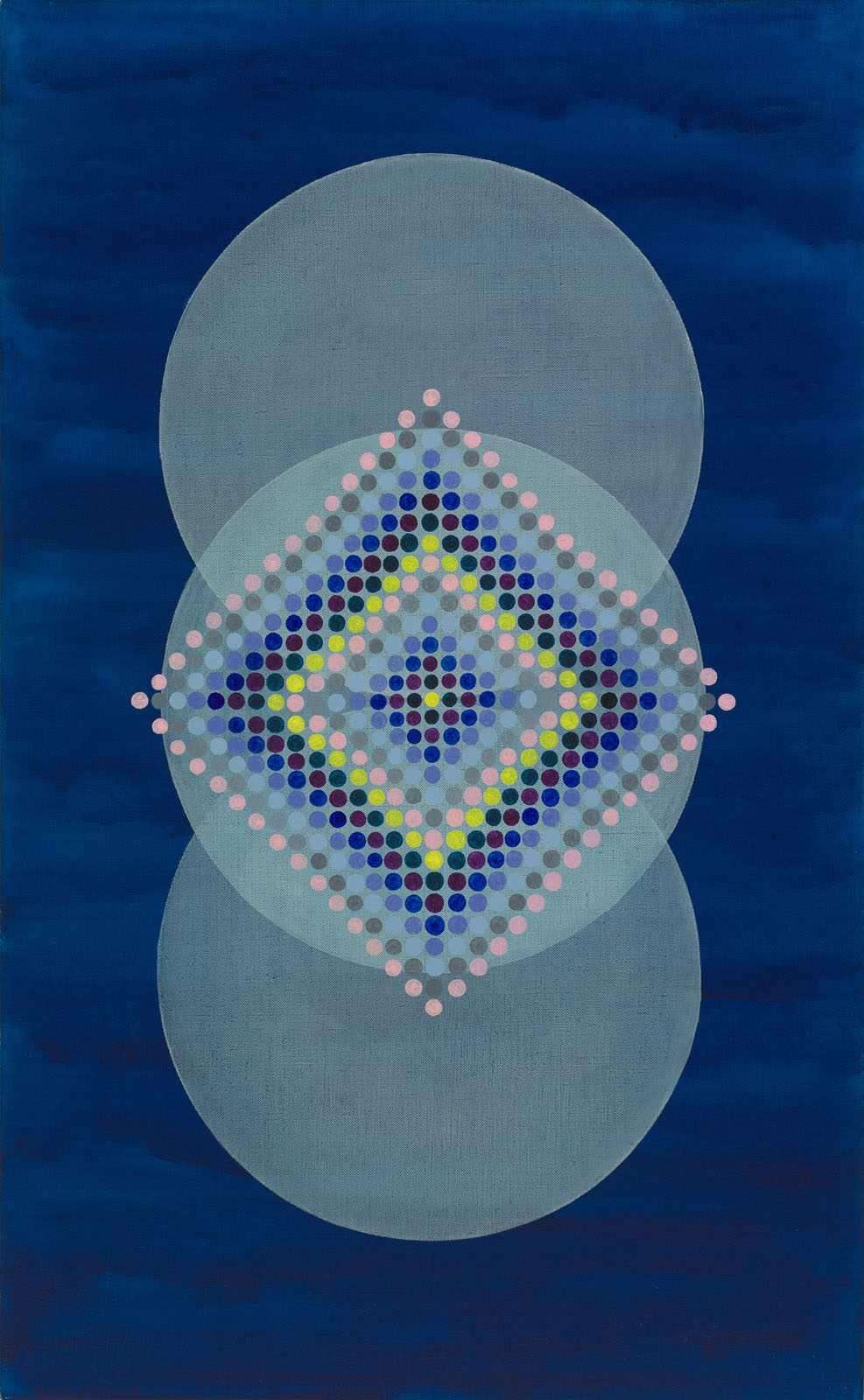 In her series Hours, Grace DeGennaro explores the ways we experience the passage of time. She uses iteration to depict this movement, akin to the way mathematicians iterate a model, as Janko Gravner and David Griffeath do to generate their Snowfakes, or how a computer program progresses through an iterative algorithm, as in John Conway’s Game of Life. Time that progresses discretely is visualized in her beads of pigment, suggesting a clock ticking through the series hour by hour. From afar, however, the series evokes the continuous, unbroken flow of time from past to future, through the loosely brushed washes of color in the backgrounds, which reflect the shifting light as day turns into night.

To construct her dynamical system, DeGennaro uses distinct mathematical patterns. In particular, she pulls from the Fibonacci sequence in two distinct ways. First by integrating its numbers into her work, for example her use of the number 8, and second, through the use of the golden mean, or golden ratio, which she employs to determine the dimensions of her canvases. The Fibonacci number sequence results from a discrete dynamical system where each number in the sequence is the sum of the previous two numbers. Starting with 0 and 1, the sequence progresses: 0, 1, 1, 2, 3, 5, 8.... As the terms increase, the ratio [nth term/(n-1)th term] approaches a constant value of approximately 1.618, that is, the golden mean. The golden ratio appears frequently in nature, such as in the spiral of a nautilus shell, the proportions of the human skeleton, and the measurements of a DNA molecule. Many artists — Leonardo da Vinci for example — have used the golden mean in the construction as well as composition of their work because this ratio is considered to be especially pleasing to the eye. DeGennaro’s use of these patterns allows us to experience a rhythm in her work analogous to the passage of time.

Grace DeGennaro (b. 1957) is based in Yarmouth, Maine and received her BS from Skidmore College in Saratoga Springs, New York, and her MFA from Columbia University in New York City. She has had solo exhibitions at Schema Projects in Brooklyn, the State House, in Augusta, Maine, Clark Gallery in Lincoln, Massachusetts, Aucocisco Gallery in Portland, Maine, and at the New England Foundation for the Arts in Boston. DeGennaro is the recipient of multiple awards, including the the Hudson River Museum, Contemporary Artist Award, in Yonkers, New York, the Ballinglen Arts Fellowship in North Country Mayo, Ireland, the Good Idea Grant from the Maine Arts Commission, and a CATWALK Institute Artist Residency in Catskill, New York. Her work is in the permanent collections of the Heckscher Museum in Huntington, New York, the Smithsonian American Art Museum in Washington, DC, and Ballinglen Foundation Archive.
View Website