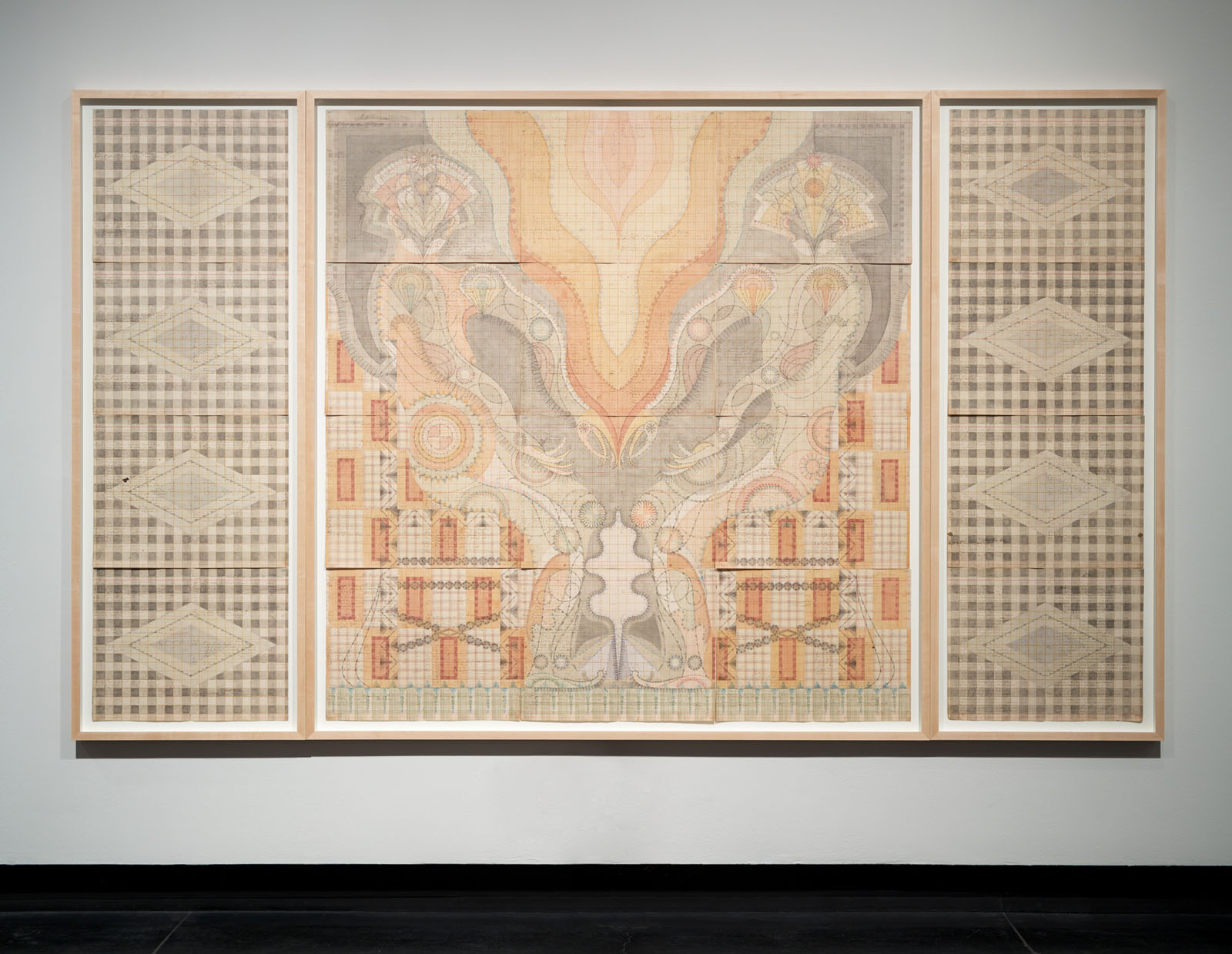 Louise Despont makes intricate pencil drawings on antique ledger paper using architectural stencils. The ledgers, originally used to keep track of expenses and accounts, serve a new purpose in Despont’s work, accounting for time; as she puts it, “an account of every day that I put into the drawing… a life spent.” This daily practice, she says, has yielded surprising discoveries: “To be focused and dedicated to doing one simple thing can perhaps be the most transformative thing. That as narrow as it is, it can be infinitely deep.” Each drawing emerges organically, beginning with a few marks on paper, but with no formal plan. According to Despont, the drawing guides itself. “It’s a complexity that you can’t think up. It’s like little mineral deposits build up and make an entire surface.” Her drawings, some on single sheets, and some extending across multiple sheets, appear controlled and detailed, but for Despont, each drawing is a process of discovery, with a larger, universal force guiding the emerging patterns. This intuitive process generates imagery that is symmetrical, highly geometric, and possessed of an expressive energy that she feels is connected to both the spiritual realm and to nature. Despont lives part of each year in Bali, and the black and white grids with diamond shapes that flank the central drawing — a pattern Despont refer to as “Eyes of Consciousness”— bears striking similarity to the traditional Balinese cloth called kain poleng, used to wrap sacred objects. This cloth, like all Balinese textiles, is a material “through which the divine nature of the universe and its material manifestations are recognized and expressed.” You can find an example of this fabric in the exhibition on the perimeter of the mat on which the gamelan sits.

Louise Despont (b. 1983) is originally from New York City and currently divides her time between Brooklyn and Bali, Indonesia. Despont has a BA in Art Semiotics from Brown University in Providence, Rhode Island. She has been featured in multiple solo exhibitions, most recently at The Drawing Center in New York City and at Pioneer Works in Brooklyn. Her international exhibitions include Galerie Isa in Mumbai, IBID Projects in London, and IMO Projects in Copenhagen. She is currently represented by Nicelle Beauchene Gallery. Despont is the recipient of a Weston Price Film Award from Brown University, as well as a Fulbright Fellowship. She has completed residencies in Sanskriti Kendra, New Delhi, Polli Talu Arts Center, Estonia, and The MacDowell Colony in Peterborough, New Hampshire.
View Website