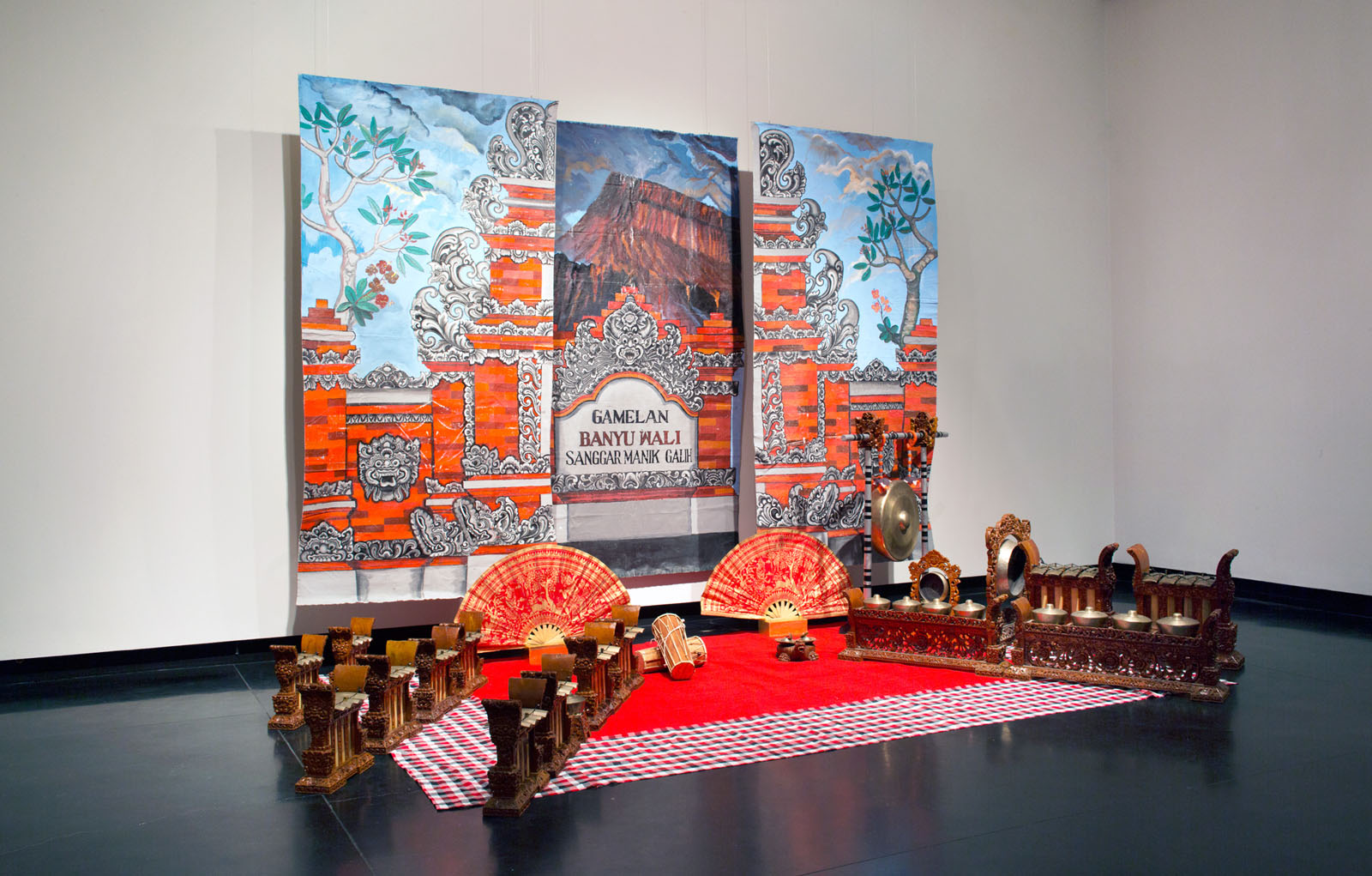 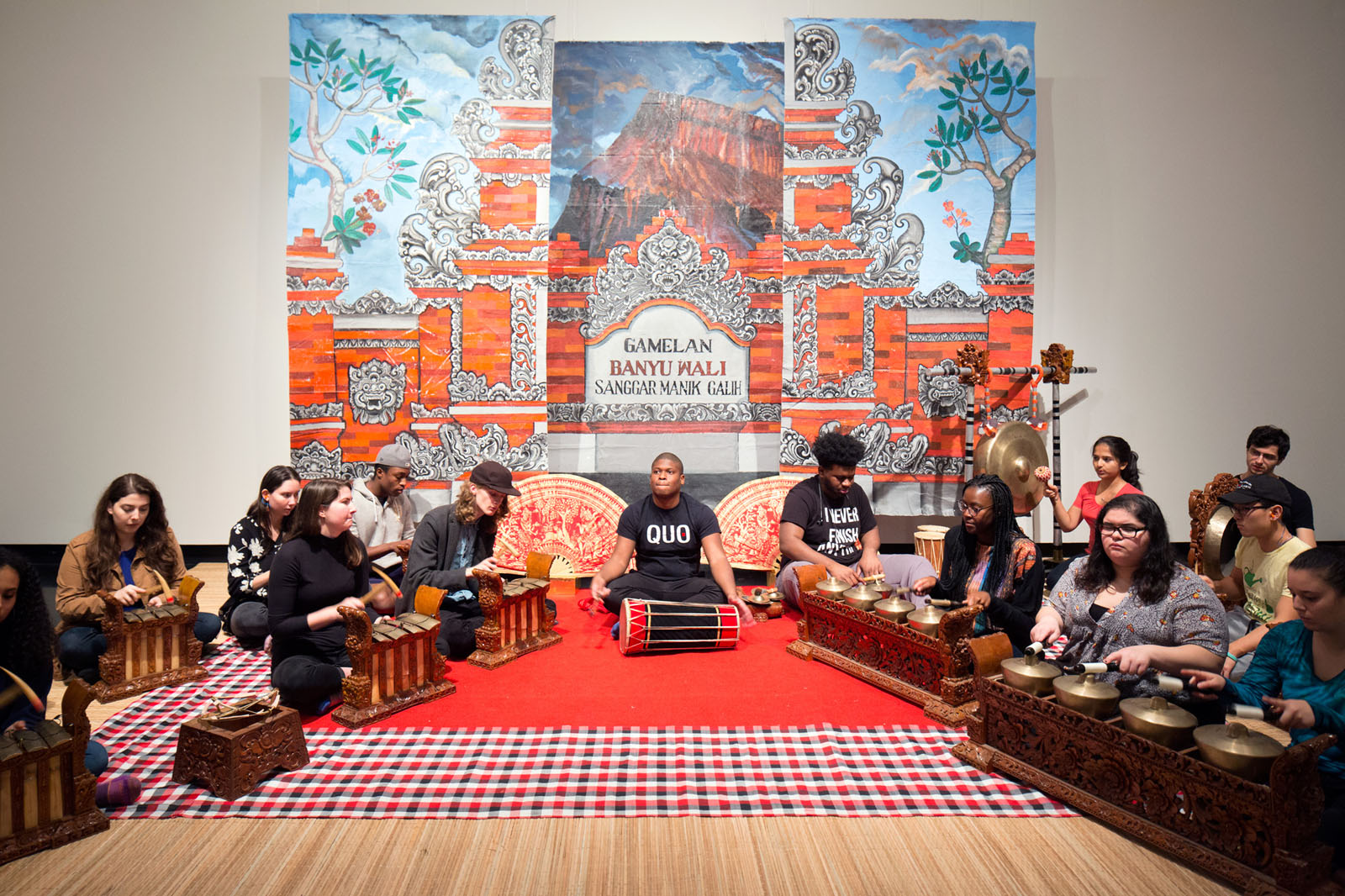 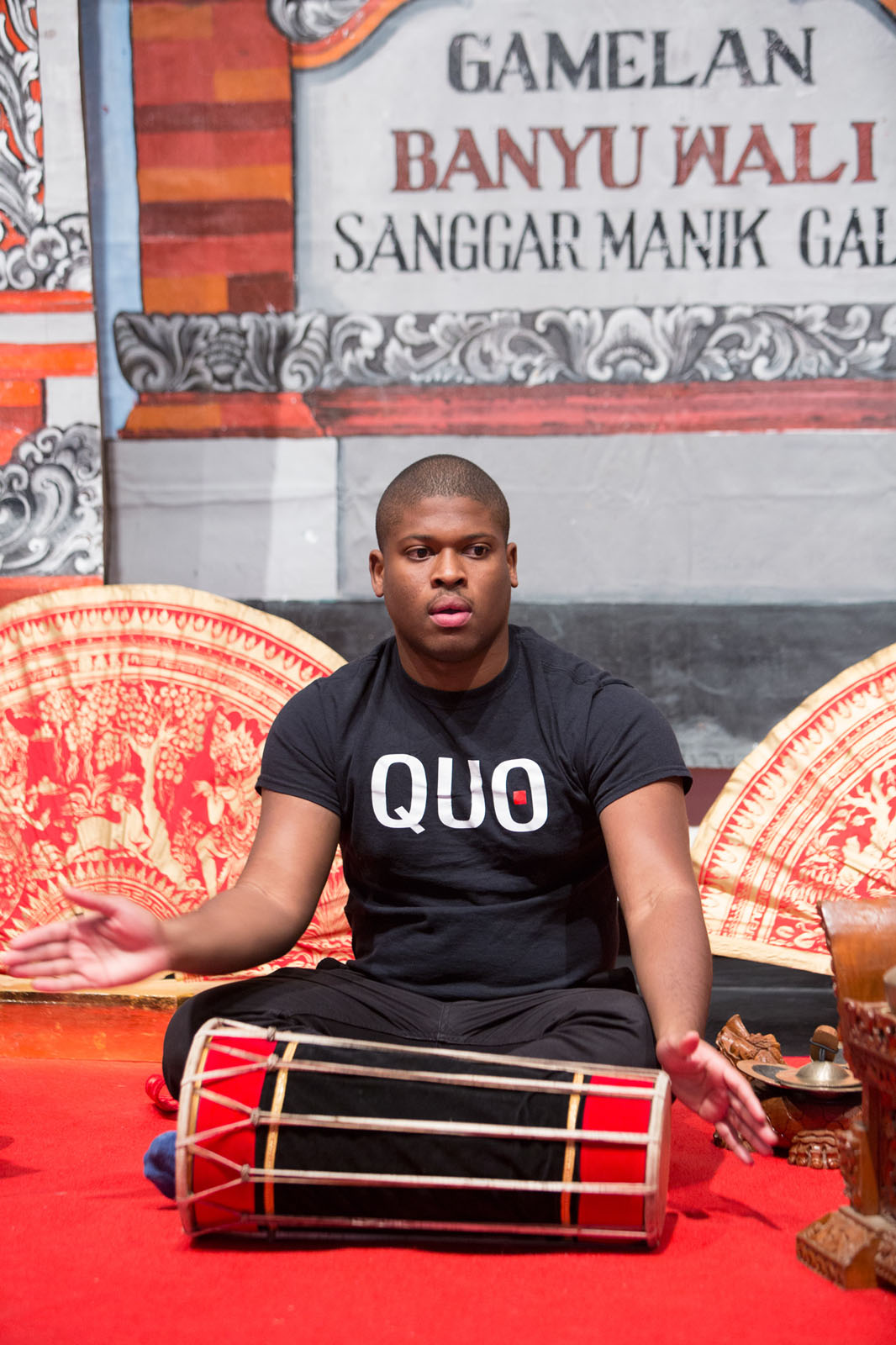 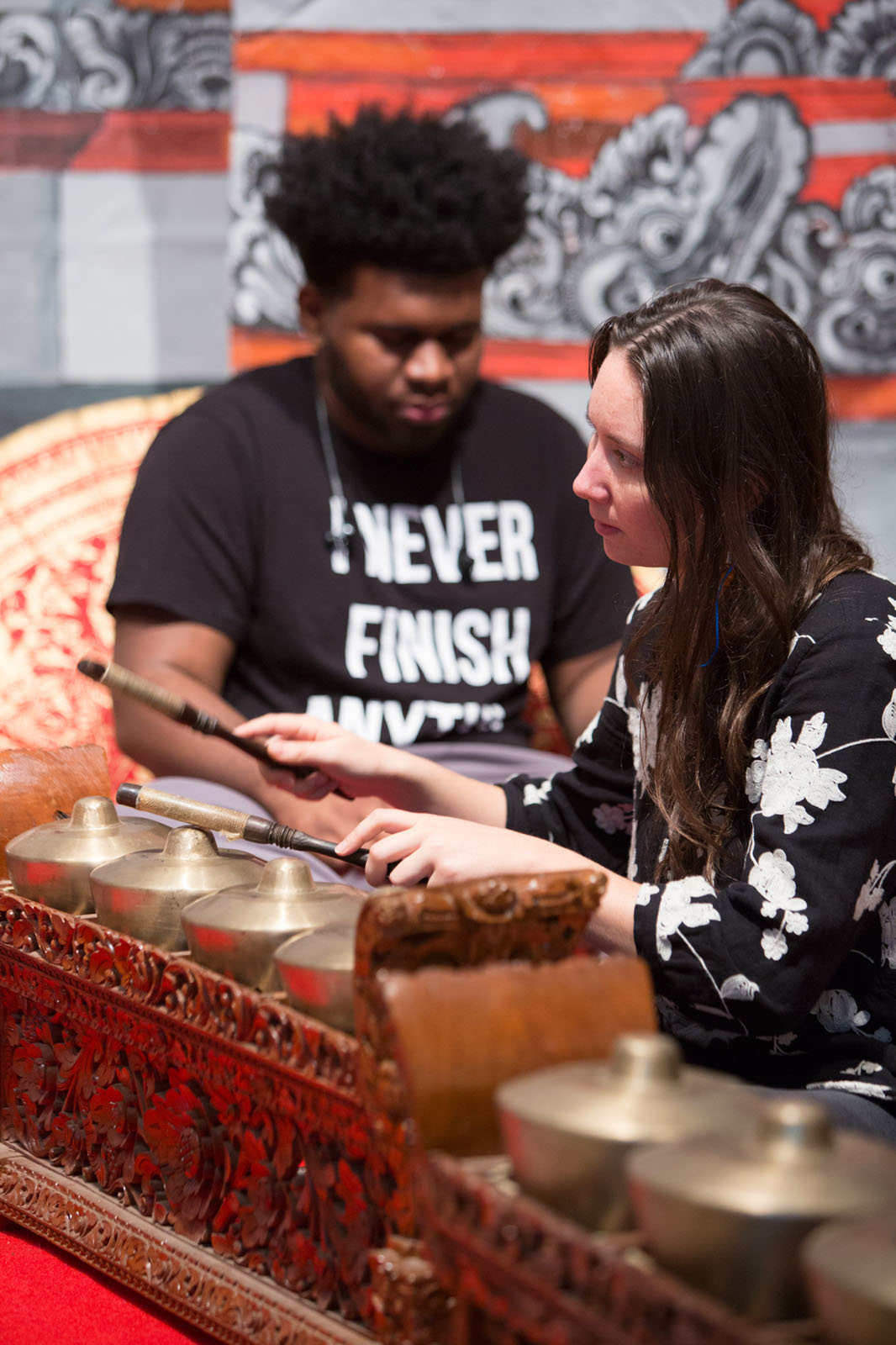 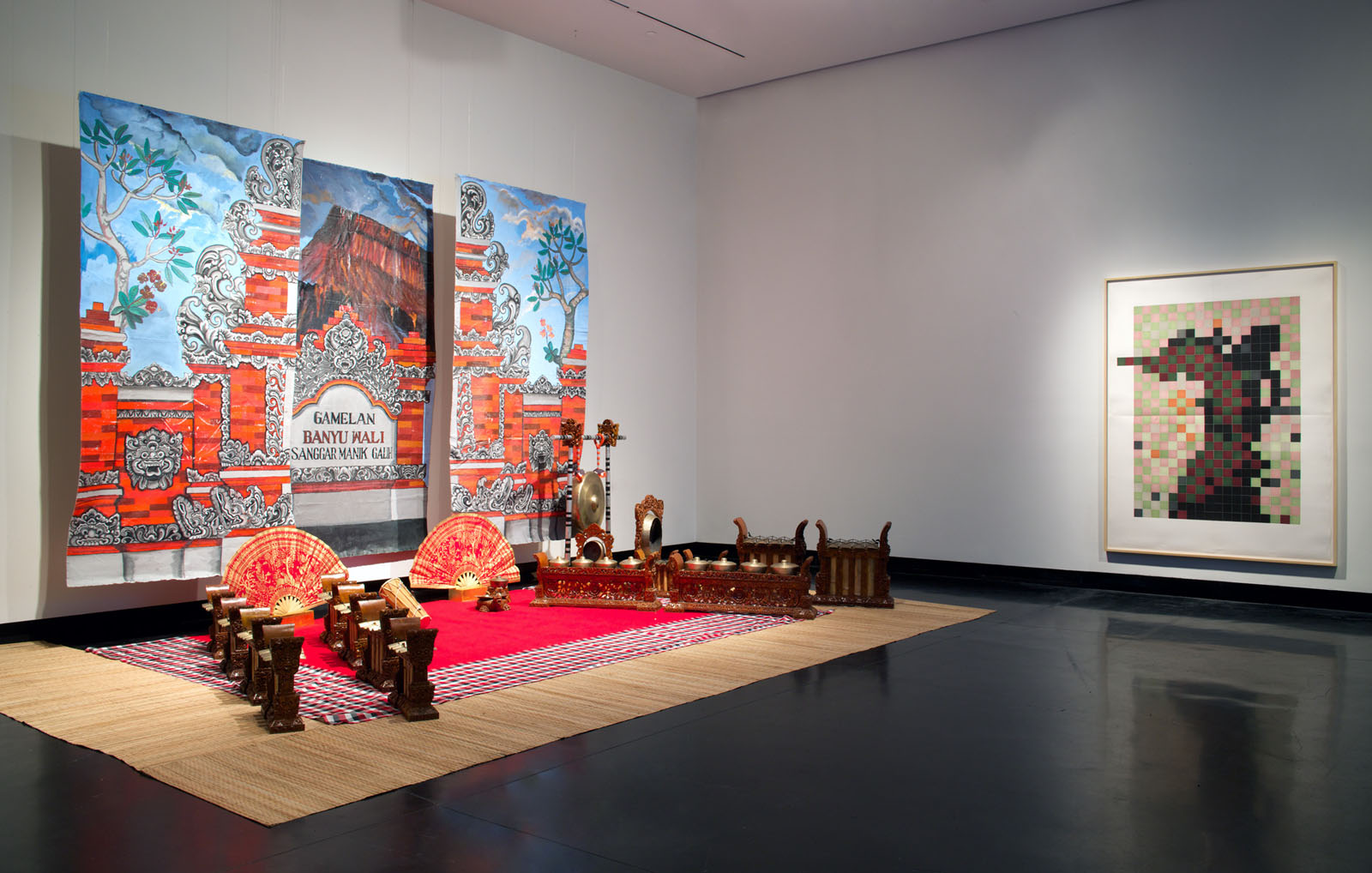 Pattern in Balinese culture occurs in myriad ways, across multiple platforms — from architecture and temple construction, to textiles, to traditional dances and musical expressions. Balinese music is rooted in the royal courts, religious practice, and Hindu culture and mythology. This sophisticated cyclic music — gamelan — is analogous to the life-cycle elements of Agama Hindu Dharma (Balinese Hinduism), where life itself is cyclic. Both ordered and complex, gamelan music reflects pattern in its performance and its accompanying dances, where hand, foot, and eye movements correspond to angsels, breaks or flourishes in repeated melodic lines. This Gamelan Angklung of jackfruit wood and bronze was built by Pande I Made Gabeleran, the renowned Balinese gongsmith from the village of Blahbatuh in Gianyar, Bali, Indonesia Gamelan Angklung, one of over thirty types of gamelan in Bali, is a four-tone ensemble performed primarily in temples or carried in processions. Often described as fractal in nature (though neither infinite nor exclusive) with an underlying heterophonic structure — single melody performed in multiple variations — gamelan relies on a melody played at different speeds and in different elaborations with short, repeating, interlocking patterns called kotekan. Ethnomusicologist Michael Tenzer suggests that Balinese music reflects a tree, with the melody as the trunk, grounding everything above it, and the elaborations or decorations above and beyond the trunk as its leaves, flowers, and roots.

Skidmore’s ensemble, Skidmore College Gamelan Banyu Wali, will rehearse with the gamelan throughout the fall semester. Rehearsals are open to the public on Thursday October 6 and Thursday November 3, from 5:30 to 7 PM. Concerts will take place on Saturday, October 15, at 6 and 6:30 PM; and Thursday, December 8, at 7 PM.