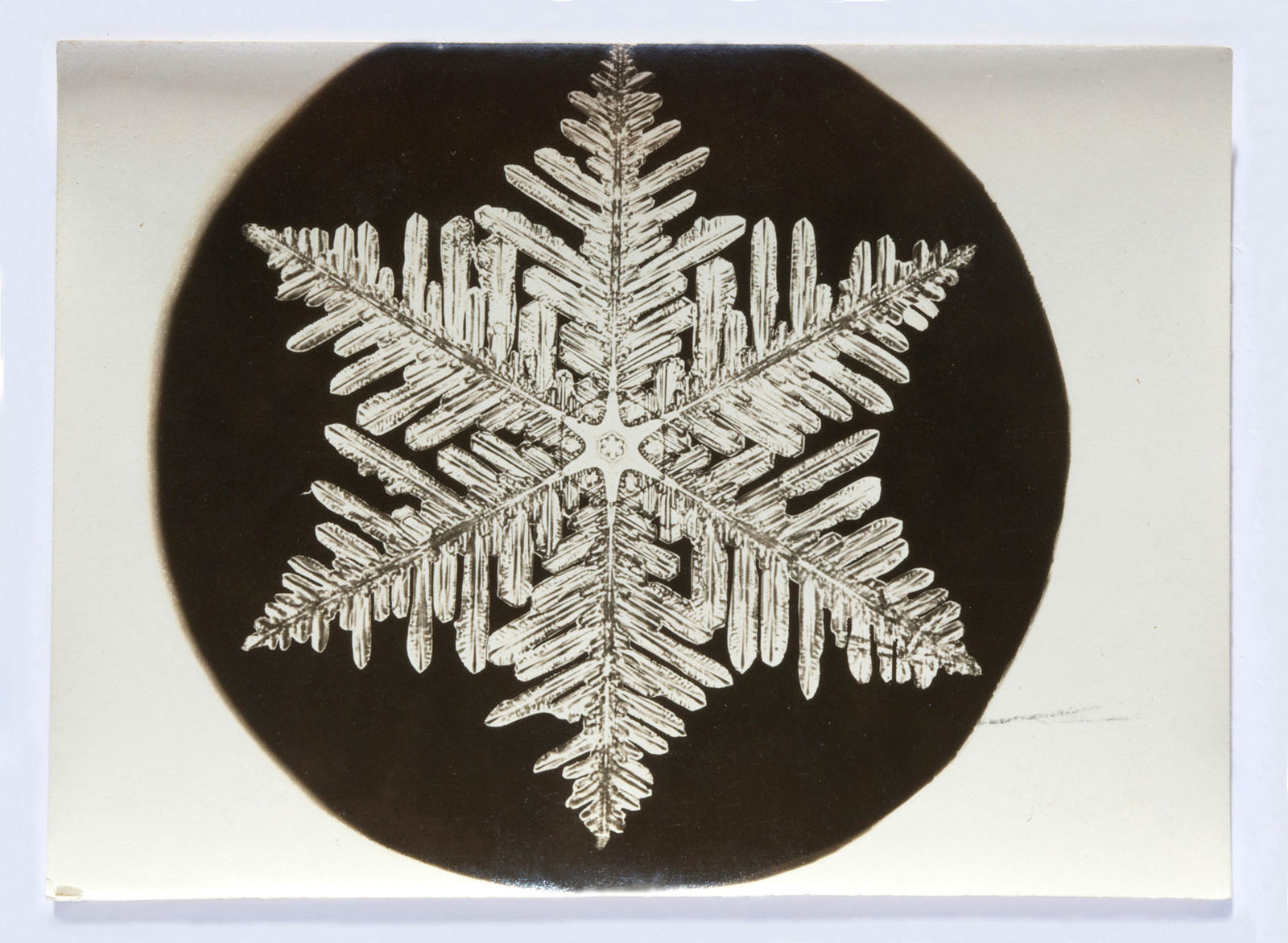 Wilson “Snowflake” Bentley, a farmer and amateur meteorologist, sought to capture the sixfold symmetry of snowflakes and illustrate their uniqueness. Developing novel photomicroscopy techniques beginning in 1885, Bentley was the first to photograph a single snow crystal, and his photomicrographs capture the singular nature and underlying design of form of the snowflake. In a sense, Bentley’s works respond to the German mathematician and astronomer Johannes Kepler’s 1611 inquiry De Nive Sexangula (On the Six-Cornered Snowflake). Written as a New Year’s gift for his patron and benefactor Johannes Matthaeus Wacker von Wackenfels, this essay continued Kepler’s inquiry into the genesis of forms and theorized about the origin of the intricate hexagonal pattern of the delicate snowflake structure. “There must be a cause,” Kepler wrote, “why snow has the shape of a six-cornered starlet.” Within his essay, he searched for the agent of form in much the same way humans question the origin of pattern. Is the pattern of the snowflake, he wondered, imposed by God? Or is the hexagonal form inherent in the purpose it serves? To aid in his exploration, Kepler theorized about the construction of other natural forms such as seed packing in the pomegranate or the formation of hexagonal cells in a honeybee hive. In his photomicrographs, Bentley enables viewers to study the unusual six-sided radial symmetry of snowflakes without their melting away. The mathematical model developed by Janko Gravner and David Griffeath, illustrated in their computationally generated Snowfakes displayed nearby, encode the same physical structure and natural beauty.

Wilson A. Bentley (b.1865 -1931) was a self-educated farmer from Jericho, Vermont. He was a pioneer in the area of photomicrography, becoming the first person to photograph an individual snowflake by adapting a microscope and a bellows camera; he first captured a clear snowflake image in 1885. He would go on to photograph more than 5,000 snowflakes during his lifetime. Bentley said, "Under the microscope, I found that snowflakes were miracles of beauty and it seemed a shame that this beauty should not be seen and appreciated by others. Every crystal was a masterpiece of design, and no one design was ever repeated. When a snowflake melted, that design was forever lost." He published a book, Snow Crystals, in 1931, dying just a few months after its release due to complications from exposure to frigid temperatures. Over the course of his lifetime, many colleges and universities throughout the world acquired his snow crystal photomicrographs and he regularly published articles for magazines and journals including Scientific American and National Geographic.
View Website
View Website